The idea of owning a pet entices many people. Whether it is a cat, a dog or something out of the ordinary, such as a turtle for example, they become an addition to one’s existence. They make daily routine slightly less dull and help smooth out the rough patches in life. It is no wonder why, according to recent statistics, that sixty-seven percent of american households own an animal. That roughly equals to eighty-five million homes all across the United States.

As perfect and idyllic as it seems, there is a lot more to the surface than just going out to purchase or adopt one. Just like a human being, they all come with their own individuality and needs. An animal needs love, care, attention and most of all, understanding.

Not everyone will be equipped with the knowledge to give their pet the best living conditions and that is completely normal. This is where animal owners reach out to trainers such as Tom Davis, also known as “America’s Canine Educator”, for help. He has worked a considerable amount of time, thirteen years to be exact, with dogs and knows just what to look out for in order to bring them closer to their pet companion.

His love for them has always been present, ever since he was a child, playing in his backyard in the small town of South Glens Fall, in Upstate New York.

Tom’s approach to dog training is what differentiates him from others in the canine business. His passion for helping others dictates his life. He specializes in creating better relationships between the client and their canine by explaining to them a point of view they often miss: the dog’s. The majority of his work is with some that have been through at least three different trainers before landing at his company, the Upstate Canine Academy.

“A dog named Chloe was in a local shelter here in NY and the shelter had reached out to me for help with Chloe. She was a mix that was just too much for the volunteers and training staff at the shelter. I went in, worked with Chloe and ended up bringing her back to UCA to work and start a new regime. After a couple days Chloe was walking nicely on the lesh and listening to commands very well. She now lives with a young couple running off leash enjoying her new life outside of the shelter” says Tom.

Millions of people are good with dogs but a very small percentage of them can isolate the core problem and empower owners to change and make a difference.

Through his eyes, educating your pet becomes an art form, it is no longer just a job. Tom’s main focus throughout his career is to give everyday dog owners the ability to grasp the final picture and the best techniques to better understand their canines. 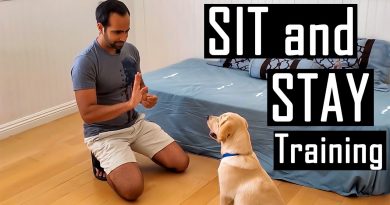 How To Keep Dogs Calm Around Food – Live Dog Demo!

How to Train your Dog to Come When Called

How to train your dog to come when called! This video is sponsored by Petflow! PETFLOW’S *NEW* OFFER: Enter discount