It is estimated that canines possess up to 300 million olfactory receptors in their nose, compared to about 6 million in humans. Not only that, but the part of a dog’s brain devoted to analyzing smells is about 40 times greater than in humans.

Therefore, it’s no wonder pooches are extremely useful tools in the job of detection, whether they’re finding explosives, drugs, chemicals or myriad substances. In the last several years, detection canines have increased in popularity, deployment and success as environmental surveyors for range and wildlife species. Their ability to detect species in the environment has even shown to be more reliable in some cases than standard surveying technologies.

At the same time, the emergence of the study of environmental DNA (eDNA), the genetic material collected from bulk environmental samples such as soil and water, provides researchers with another useful tool to detect the spread of certain species, whether they are plant- or animal-based. Researchers have recently shown eDNA can be collected in large quantities and studied to determine the breadth of the spread of certain species.

Nathan Hall, an assistant professor in the Department of Animal & Food Sciences and the director of the Canine Olfaction Research and Education Laboratory at Texas Tech University, and Matthew Barnes, an associate professor in the Department of Natural Resources Management and an expert in eDNA, are collaborating on a research project to evaluate and validate the ability of novel detection technologies to locate, identify and prevent the spread of invasive mussels.

Their project, “Advancing Early Detection Technologies for Dreissenid Mussel Invasion in Texas,” has received the backing of the U.S. Department of the Interior’s Fish and Wildlife Service, which has funded the project through a $233,641 grant. They hypothesize that detection canines and eDNA detection represent two state-of-the-art technologies that show similar sensitivity and capabilities, but that canines provide real-time results, and therefore represent a key advancement in detection technology.

“This is a very exciting opportunity to put the dog’s nose for conservation to the test,” Hall said. “We will measure the dog’s olfactory capability for mussel detection in comparison to gold standard environmental DNA analyses in both controlled and real-world environments. This will be a thorough dog vs. machine test, and perhaps we will find an ideal dog-plus-machine combination to best combat invasive species.”

One area of recent interest in the use of canines and eDNA is in detecting the presence of mussel larvae. Zebra mussels are believed to have first been introduced into the Great Lakes in the mid-1980s with detrimental effects, followed by the introduction of quagga mussels years later. Zebra and quagga mussels, which together comprise the Dreissenid mussel family, have depleted the levels of phytoplankton in the water, therefore decreasing the amount of prey fish in the lakes, while allowing for increased blooms of harmful blue-green algae.

Through the years, these mussels have spread throughout North America and have negatively impacted water systems such as the Mississippi River and Hudson River. In Texas, Zebra mussels invaded Lake Texoma in the late 2000s, and the Brazos, Colorado and Rio Grande river basins possess high levels of dissolved calcium, which is key to mussel growth. Consequently, stopping this invasive species before it takes over Texas’ waterways is of concern for land managers and ecologists throughout the state.

Currently, canines are used to check watercraft for Dreissenid mussels prior to launch, as well as checking shorelines or samples that may contain the presence of mussels. They have shown great success in detecting mussels at all stages of life, including the final larval, or veliger, stage. But no research has been done to date to determine canine sensitivity limits for late-stage mussel larvae.

Through this project, Hall and Barnes hope to provide a comprehensive evaluation for canine detection technology and compare that to eDNA detection sensitivity.

The project will involve four steps:

Hall and Barnes will utilize six trained canines from Mussel Dogs, a California company that uses trained dogs that have shown great success in detecting mussels both in the field and training. Water will be collected from the closest infested lakes – Belton, Canyon and Stillhouse Hollow in the Texas Hill Country – as well as the Leon and Lampasas rivers. The research will be conducted at the Chrion K9 detection dog training and research facility in Somerset, Texas.

“When people think about DNA detection and scent-detecting canines, they probably picture detectives at a crime scene,” Barnes said. “Our research is exciting because it applies these state of the art methods in an unusual but useful way to enable detection of aquatic invasive species.” 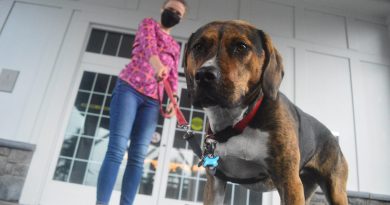 Q: We live in an apartment complex where many dogs bark. Some of the tenants want to require the owners