ALEXANDRIA — Our 4-year-old black lab, Gus, was letting out excited whines from our dining room as I started gathering up my gear for a bow hunt on the afternoon of Oct. 9.

This is typical for hunting dogs. Throw on some blaze orange for a pheasant hunt or grab the shotgun to head to the marsh for waterfowl and a good bird dog senses what is ahead. Gus knows now that when I grab my bow, there is the potential for fun.

I had debated on whether or not to even bring him on this day. It was a 50-minute drive to hunt this little 7-acre piece. Too far to drive back home and get him should I shoot a deer, but Minnesota had kicked my butt through the first two weeks of this archery season.

A couple of close calls on does in September where I chose not to force a shot and then a few empty sits in a row. Would this hunt be any different?

Temperatures were cool enough that Gus could stay in the truck comfortably during my sit. Every hunt is a new opportunity to fill a tag, so I put him in the kennel and off we went.

I had never hunted this piece of woods, but I did have a general understanding of it from years ago when I hunted an adjacent strip of timber in my early 20s that has now been sold.

The layout of the land features some thick cover down low to the north, sumac on a high shelf to the south and then white and red oaks in the bottom. A big piece of woods is across the blacktop to the east, and a field in short grass and pines parallels the trees to the west.

I had very limited space to work with as I scouted my way in, but the deer sign was good. Many trails running north and south through the trees and onto the adjacent properties.

I got just inside the white oaks at the bottom of the ridge about 70 yards from the sumac up high where deer could be bedded. Fresh droppings near an intersection of trails marked the spot I chose to set up.

At about 5:45 p.m., a big doe appeared 30 yards away when I first spotted her. With my bow in hand, I hid behind the trunk of the tree in my hunting saddle. She walked to about three yards and looked up at me.

The doe bobbed her head a few times before slowly turning and trotting off a few steps. This was my chance to draw the bow.

She turned broadside, but I did not want to release an arrow with her walking or try to stop her and risk spooking her more. She stopped just to the left of my shooting lane as I extended off the tree with my feet to rise up a little and get a better vantage point.

There was an opening about the size of a volleyball near her vitals. At 10 yards and shooting a 200-grain single-bevel broadhead, that is a shot I know I can make. I settled the pin and pulled through as the arrow hit just behind her shoulder midway up the body.

Gus could hardly contain himself as I got back to the truck and connected the lead rope to his collar.

Using dogs to track big game after the shot is legal now in almost every state in the country. Most states,

, require the dog to be leashed and in control of the handler at all times during the track.

We got to the shot location, and Gus immediately took off. He veered off course a bit, and I decided to go back and restart him. This time, it was obvious he was on the right trail.

For upland bird hunters, picture the body language of a dog right before the flush or locking up on point. That was Gus for this entire track.

He led me down a trail and then into the thickest brush on the property. We had traveled about 85 yards when I looked up in my headlamp and saw her. Gus’ nose was glued to the ground as he tracked frantically for a few more seconds before finding the prize.

This was my second deer of the 2022 season that Gus has brought me right to. Neither have been long tracks. The goal as archers is obviously to make good shots that lead to quick kills, but using Gus has added to our bond and made the hunt even more exciting.

You can train your dog to do this too. I am confident in that because I am certainly not an expert dog trainer.

I have limited time between work and a family with two young kids, but devoting half an hour a few nights a week this past summer was all I did to prepare Gus for this season.

through a company called DogBone. That came with a short training manual, part of a deer hide, a drag line and bottled bloodtrail scent that introduces the dog to the scent of a wounded deer they need to identify.

Gus has a strong background in pheasant hunting that I believe helped him in this training. It took laying two tracks for him to get a good idea of what we were doing. We started with short, easy tracks in our lawn, eventually working to tougher tracks into taller grass and timber.

ran into a standing corn field. I walked him to the edge of the corn where the deer had entered and gave the command. “Work.”

Within a couple minutes, we were standing over the biggest buck I have ever shot.

Dogs are incredibly talented animals. They require our guidance as handlers, but I am constantly blown away by how much of a good hunting dog is instinct. Teach them necessary obedience, and then get them on as many birds as possible in hunting situations. I have pheasant hunted over fantastic dogs whose training consisted of only that.

Tracking big game with Gus seems like it is going to take a similar path. I have given him the basic guidance. The rest will be enhanced with getting him on as many tracks as possible between deer I shoot and others that friends and family shoot. 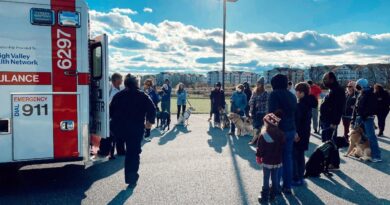 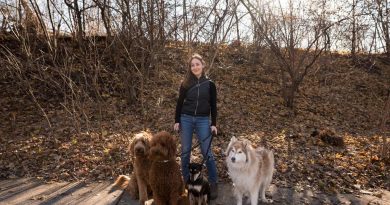 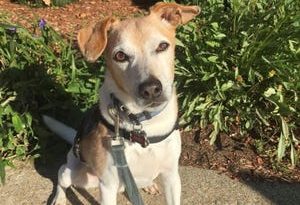